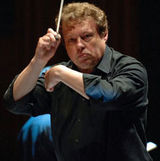 Hickox was born in Stokenchurch in Buckinghamshire into a musical family. After attending the Royal Grammar School, High Wycombe from 1959 to 1966, he studied at the Royal Academy of Music in London from 1966 to 1967, then was an organ scholar at Queens' College, Cambridge from 1967 to 1970.

In 1967, while his father was Vicar of Wooburn, Buckinghamshire, Richard founded the Wooburn Festival and eventually became its President. The Festival is now in its 43rd year and featured music, drama and the visual arts. Richard also founded the Wooburn Singers and continued as conductor until succeeded by Stephen Jackson. Hickox founded the City of London Sinfonia in 1971, remaining music director until his death, and also founded the Richard Hickox Singers and Orchestra in the same year. The Richard Hickox Singers feature in Kate Bush's album Hounds of Love, released in 1985. He was the director of music at the St. Endellion Music Festival from 1972 to 2008. In 1972 at the age of only 24 he was appointed Martin Neary's successor as organist and master of music at St. Margaret's, Westminster (the church of the Houses of Parliament), subsequently adding the directorships of the London Symphony Chorus (1976) and Bradford Festival Choral Society (1978). From 1982 to 1990, he...
Read More