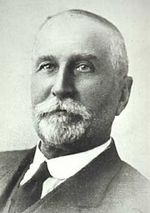 Description:
Richard Hind Cambage (7 November 1859 – 28 November 1928) was an Australian surveyor and botanist who made important contributions to the description of the genera Acacia and Eucalyptus.

Cambage, son of John Fisher Cambage, was born at Applegarth near Milton, New South Wales. He was educated at state and private schools (including Ulladulla Public School), and for a short time was a teacher at the Milton State School. In 1878 he became an assistant to M. J. Callaghan, surveyor, and took part in the survey of National Park in 1879 and 1880. On 11 July 1881 at the Elizabeth Street registry office, Sydney, he married Fanny Skillman (d.1897), daughter of the headteacher at Ulladulla.

He qualified as a licensed surveyor in June 1882, was engaged in the Department of Lands for three years as a draftsman and then entered the department of mines as a mining surveyor on 16 February 1885. In 1900 he carried out a difficult and dangerous survey of abandoned Newcastle workings running under the harbour and sea-bed. In 1902 was appointed chief mining surveyor and investigated the site of the Mount Kembla mining disaster which killed 96 men and boys. Cambage's evidence to the royal commission on the disaster led to the reversal of the coroner's verdict that the miners had died of carbon monoxide poisoning. He was chief mining surveyor until 1 January 1916, when he was made under-secretary of the mines department. He retired from the public service on...
Read More