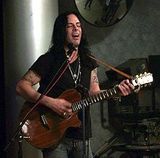 At a young age, Richie Kotzen was taken by music and first began playing piano at the age of five. At the age of seven he was inspired by the band KISS to learn the electric guitar. Relentlessly developing chops and his own unique voice on the guitar, he started his career in a band named Arthurs Museum. Kotzen was eventually discovered by Shrapnel Records' Mike Varney, and he recorded his first solo album by the age of 19. He created the video Rock Chops for REH video in 1989, highlighting many of his formative techniques, including using wide-intervals and fluid sweeping.

In 1991, Kotzen made his big break when he joined the rock band Poison at age 21, co-writing and performing on the album Native Tongue. This album produced two top twenty singles which Richie co-wrote, "Stand" and "Until You Suffer Some ". In late-1993, Rikki Rockett, the drummer of Poison, discovered that Kotzen was having a relationship with Rockett's former fiancee, Deanna Eve. Kotzen was bought out due to this incident. In 1999 Kotzen replaced Paul Gilbert as guitarist in the mainstream rock band Mr. Big. Kotzen maintained the band's success, performing on the Mr. Big record Get Over It, which sold more than 175,000 copies in its first two weeks in Japan, eventually reaching platinum status. Kotzen also contributed guitars to Mr. Big's subsequent release Actual Size. The...
Read More