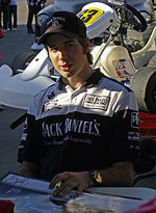 Description:
Rick Kelly (born on 17 January 1983 in Mildura, Victoria, Australia) is a current V8 Supercar racing driver, currently living in Melbourne, Victoria. He is the younger brother of former Bathurst 1000 champion, Todd Kelly. He previously drove for the HSV Dealer Team and has previously contributed to winning at the Bathurst 1000 alongside Greg Murphy in 2003 and 2004 under the banner of Kmart Racing. He moved to the new formed family team Kelly Racing for 2009 and onwards.

In 2006, Kelly won the Australian V8 Supercar Championship Series after being one of the most consistent performers throughout the season. The victory, however, was not without its share of controversy.

Despite not winning a single round overall (though he did win an individual race), Kelly entered the final round of the series at Phillip Island seven points ahead of his nearest competitor, Craig Lowndes, (who had won four rounds) due to consistent high points finishes in all twelve of the previous 2006 rounds.

Coming into the third and final race of the round, Lowndes had managed to pull back the deficit to be even on points with Kelly, meaning that the driver out of the two who finished first would clinch the championship. Two laps into the final race, Kelly collided with Lowndes, who then slid...
Read More