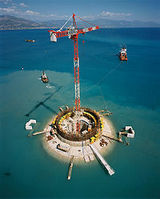 Description:
The Rion-Antirion bridge (), officially the Charilaos Trikoupis bridge after the statesman who first envisaged it, is the World's longest multi-span cable-stayed bridge. It crosses the Gulf of Corinth near Patras, linking the town of Rion on the Peloponnese to Antirion on mainland Greece.

Its official name is the Charilaos Trikoupis Bridge. Charilaos Trikoupis was a 19th century Greek prime minister, and suggested the idea of building a bridge between Rion and Antirion; however, the endeavour was too expensive at the time, when Greece was trying to get a late foot into the Industrial Revolution.

The long bridge dramatically improves access to and from the Peloponnese, which could previously be reached only by ferry or via the isthmus of Corinth at its extreme east end. Its width is — it has two vehicle lanes per direction, an emergency lane and a pedestrian walkway. Its five-span four-pylon cable-stayed portion of length is the world's second longest cable-stayed deck; only the deck of the Millau Viaduct is longer at . However, as the latter is also supported by bearings at the pylons apart from cable stays, the Rion-Antirion bridge deck might be considered the longest cable-stayed "suspended" deck.

This bridge is widely considered to be an engineering masterpiece owing to several solutions applied to span the difficult site. These difficulties...
Read More