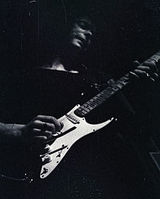 Description:
Richard Hugh "Ritchie" Blackmore (born 14 April 1945) is an English rock guitarist who is an American resident, known for his work in Deep Purple. During his career Blackmore also fronted his own band, Rainbow. In the late 1990s he retired from hard rock for good, to start concentrating on the traditional folk rock project Blackmore's Night, which featured his wife Candice Night on vocals.

Blackmore was born at Allandale Nursing Home, Weston-super-Mare, England, but moved to Heston, Middlesex at the age of two. He was 11 when he got his first guitar. His father bought it for him on certain conditions, including learning how to play properly: "So I actually took the lessons for a year – classical lessons...."

Whilst at school he did well at sports including the javelin. Blackmore left school at age 15 and started work as an apprentice radio mechanic at nearby Heathrow Airport. He was given guitar lessons by Big Jim Sullivan. He was influenced in his youth by early rockers like Hank Marvin.

He joined minor local bands from 1960 or 1961. His playing improved and in 1963 he started out as a session player for Joe Meek's music productions and performed in several bands. He was a member of the instrumental combo, The Outlaws, and backed Heinz (playing on his top ten hit "Just Like Eddie"), Screaming Lord Sutch, Glenda Collins and Neil Christian among others. While working for Joe...
Read More