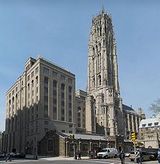 Description:
The Riverside Church in the City of New York is an interdenominational (American Baptist and United Church of Christ) church in New York City, famous for its elaborate Neo-Gothic architecture&mdash;which includes the world's largest tuned carillon bell. It is located in Morningside Heights between Riverside Drive and Claremont Avenue and between 120th Street and 122nd Street.

The tallest church in the United States and the 24th tallest in the world, it was described by The New York Times in 2008 as "a stronghold of activism and political debate throughout its 75-year history ... influential on the nation’s religious and political landscapes." The church received New York City Landmark status in 2000.

In 1922, the congregation of the Park Avenue Baptist Church, with the major financial support of John D. Rockefeller, Jr., a member of the church, and its modernist Baptist pastor Harry Emerson Fosdick, decided to create a large, cathedral-like church in New York City.

This church was to be built around three main principles advocated by Rockefeller and Fosdick: a church in an interdenominational setting, a large church in a neighborhood important to the city, and a church open to all who profess faith in Christ. Based on these requirements, land was purchased by Rockefeller and construction was completed in&nbsp;1930.

Modeled after Chartres Cathedral in France, Riverside Church remains not only an important landmark...
Read More