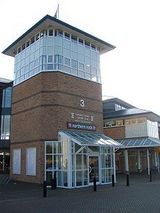 The club's acceptance into first-class cricket was made conditional on the building of a new Test match-standard cricket ground. Work began on the new ground at the Riverside, a spectacular location overlooked by Lumley Castle, in 1990, and development has continued in phases until the present day. Work on the outfield and playing surface began in 1993. In its first three seasons in the County Championship, the Club played in a variety of locations around the county, but the Riverside ground was pronounced ready for cricket in time for the 1995 season, even though many of the buildings were still temporary or unfinished. The ground hosted its first game, Durham vs Warwickshire, on 18 May 1995.

Other facilities at the ground continued being built over subsequent years, and the club's Don Robson Pavilion was opened by Queen Elizabeth II in 1996. A Bannatyne's Health Club is located on the boundary next to the Don Robson Pavilion. The full ground capacity, including permanent and temporary seating, is 15,000.

The development of the Riverside into a significant cricketing venue was underscored in 1999, when it hosted World Cup matches involving Pakistan, Scotland, Australia and Bangladesh, and then in 2000 when it staged the first One Day International match in the NatWest Triangular......
Read More