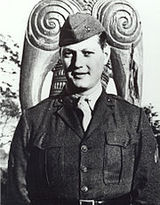 Description:
Sergeant Robert Allen Owens (September 13, 1920-November 1, 1943) was a United States Marine who was killed in action during World War II. He was posthumous awarded his nation's highest military award &mdash; the Medal of Honor &mdash; for his heroic actions on his first day in combat at Bougainville. The commanding general of the 3rd Marine Division described Owens' heroism &mdash; "Among many brave acts on the beachhead of Bougainville, no other single act saved the lives of more of his comrades or served to contribute so much to the success of the landings."

Robert Allen Owens was born in Greenville, South Carolina, on September 13, 1920. The family later moved to Spartanburg, which young Owens listed as his home town. After two years in high school, he went to work as a textile worker in a neighboring town. He worked at that for five years before his enlistment in the Marine Corps on February 10, 1942.

In 1942, Owens went through recruit training at Parris Island, South Carolina, and then Owens continued his training with the 1st Training Battalion of the 1st Marine Division, then located in New River, North Carolina. In June, the unit's designation was changed to Company A, 1st Battalion, 3rd Marines, 3rd Marine Division. The Division left the South Pacific and the 3rd Marines' first overseas station at Tutuila, American......
Read More