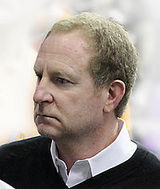 Description:
Robert Sarver (born 1961 in Tucson, Arizona) is the current majority owner of the Phoenix Suns. He bought the NBA franchise from Jerry Colangelo in the spring of 2004.

His father was Jack Sarver, a prominent Tucson businessman, banker and hotel developer (the elder Sarver built the Aztec Inn, the Plaza International Hotel (now a Four Points by Sheraton) at Speedway and Campbell in Tucson in the early 1970s, built and operated the Tucson area Howard Johnson's locations and headed a local savings and loan). Jack Sarver died of a heart attack in 1979; Robert Sarver would eventually donate to his alma mater, the University of Arizona, funds to its heart research center, which in 1998 was renamed the Sarver Heart Center in honor of his father.

A lifelong sports fan, Sarver’s quest to purchase an NBA team began with a conversation with University of Arizona basketball coach Lute Olson. Olson referred Sarver to Steve Kerr, a former player at Arizona and a 15-year NBA veteran, to assist him in buying an NBA...
Read More