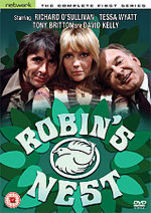 Description:
Robin's Nest is a British sitcom starring Richard O'Sullivan as Robin Tripp, one of the lead characters in the sitcom Man About the House, which had ended in 1976. Robin's Nest aired for six series from 1977 to 1981, and co-starred Tessa Wyatt as Robin's girlfriend and later wife and Tony Britton as her father. It was made by Thames Television and aired on ITV.

In the first episode Robin and Vicki, who share a flat over a Chinese take-away, discover that their landlords, unable to pay the rent, have disappeared and that the building is in danger of re-possession. It is the practical Vicky who comes up with the perfect solution: Robin should take over the take-away and convert it into a bistro (The "Robin's Nest" of the title). Robin could not afford to go it alone so he had to go cap-in-hand to Vicky's father, James Nicholls (Tony Britton), to ask him to be his business partner. Although Nicholls disapproved of Robin (believing him to be beneath his daughter) he knew a sensible business deal when it was offered to him - despite his failings, Robin was a brilliant chef - and he agreed. Lots of tension and misunderstandings were to arise from their mis-matched relationship.

Creators Cooke and Mortimer had to get special permission from the IBA (the then governing body of Independent TV in Britain) to be able to portray an unmarried couple living together; special concern arose at scenes in which Robin and Vicky were seen in an obvious state of undress in...
Read More