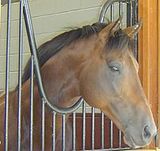 He is named after the Rock of Gibraltar, a monolithic limestone promontory located in Gibraltar on the southern tip of the Iberian Peninsula. His name was inspired by that of his dam Offshore Boom; due to its low-tax status, Gibraltar has become a popular offshore location for British and international companies to base their operations.

During Rock of Gibraltar's two seasons in racing (2001-2002), he was trained by Aidan O'Brien at Ballydoyle Stables in Co. Tipperary, Ireland. O'Brien also bred him in partnership with his wife Anne-Marie and father-in-law Joe Crowley. Over the course of two seasons, he set a world record of seven consecutive Grade/Group 1 wins before finishing second to Domedriver in the 2002 Breeders' Cup Mile. Rock of Gibraltar was voted the 2002 European Horse of the Year.

For much of his racing career, Rock of Gibraltar ran in the colours of Manchester United manager Sir Alex Ferguson, who was named as a part-owner along with Susan Magnier, wife of Coolmore owner John Magnier. Upon Rock of Gibraltar's retirement, Ferguson and John Magnier were involved in a dispute over the exact nature of the ownership of the horse which was eventually settled out of court.