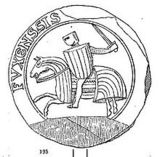 Description:
Roger Bernard II (c. 1195 – 26 May 1241), called the Great, was the sixth count of Foix from 1223 until his death. He was the son and successor of the illustrious count Raymond-Roger and his wife Felipa of Montcada.

He made his name famous in 1217 when, for six weeks, he defended the castle of Montgrenier against the onslaught of Simon de Montfort, 5th Earl of Leicester. That same year, he distinguished himself at the siege of Toulouse. In 1220, he assisted his father in the recapture of Lavaur and Puylaurens and was instrumental in helping his father retake his lost dominions. The resumption of Mirepoix wasn't accomplished until his own reign, however.

At the moment of his accession, he and the new count of Toulouse, Raymond VII, besieged Carcassonne. On 14 September 1224, the Albigensian Crusaders surrendered and the war came to an end, each southern lord making peace with the church. However, in 1226, the new king of France, Louis VIII, called the Lion, renewed the conflict in order to enforce his royal rights in Languedoc. Roger-Bernard tried to keep the peace, but the king rejected his embassy and the counts of Foix and Toulouse took up arms again. Roger-Bernard and a small contingent of his feudatories constituted a pocket of resistance in Limoux from June 1226 to June 1227, but the war was largely a discontinuous series of skirmishes. In January 1229, Raymond of Toulouse signed the Treaty of Meaux with Louis the Lion's successor, Louis IX. Already...
Read More