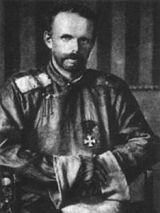 Description:
Baron Roman Nikolai Maximilian von Ungern-Sternberg (adopted Russian name: Роман Фёдорович фон Унгерн-Штернберг, which transliterates as Roman Fyodorovich fon Ungern-Shternberg) (December 29, 1885 NS – September 15, 1921) was a Baltic German-Russian Yesaul (Cossack Captain), Russian hero of World War I and a Lieutenant-general who commanded troops during civil wars in both Russia and Mongolia between 1918 and 1921. In February and March 1921 his troops wrested control of Mongolia from occupying Chinese forces. His subsequent invasion of Southern Siberia to support anti-Bolshevik rebellions in June 1921 ultimately led to his defeat at the hands of the Red Army in August of that year. Although his surname was von Ungern-Sternberg, it is often incorrectly written as Ungern von Sternberg, after the first Soviet publications about him.

Ungern-Sternberg was an independent and brutal warlord in pursuit of pan-monarchist goals in Mongolia and territories east of Lake Baikal during the Russian Civil War. His goals included restoring the Russian monarchy under Michael Alexandrovich Romanov and reviving the Great Mongol Empire under the rule of the Bogd Khan. Ungern-Sternberg fiercely persecuted those he viewed as his opponents, particularly Russian Bolsheviks and Jews. Following the collapse of his...
Read More