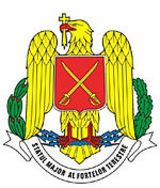 Description:
The Romanian Land Forces () is the army of Romania, and the main component of the Romanian Armed Forces. In recent years, full professionalisation and a major equipment overhaul have transformed the nature of the force.

The Romanian Land Forces were founded on . They participated in World War I, together with the Russian Empire forces in actions against the Central Powers and, despite initial setbacks, won the decisive battles of Mărăşti and Mărăşeşti. During most of World War II (until August 23, 1944) Romanian forces supported the Axis powers, fighting against the Soviet Union on the Eastern Front. From August 1944 until the end of the war, Romania fought against Germany under the control of the Soviet Union. When the communists seized power after the Second World War, the army underwent reorganisation and sovietization.

Following the 1989 revolution, due to shortage of funds, many units were disbanded and much equipment was phased out. Likewise, Romanian military capability declined because of a lack of fuel as well as training. However, since the late 1990s, a number of positive changes have come about and the level of combat readiness is growing greatly; since 1996, the military budget has grown more than four times - rising from 636 million dollars to 2.8 billion dollars in 2007. Conscription has been abolished and...
Read More