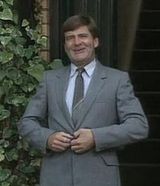 Description:
Ronald William "Ron" Dixon is a fictional character in the British soap opera, Brookside, played by Vince Earl from 1990 until the final episode in 2003, during which time he was involved in several major storylines.

He divorced his first wife "DD" shortly after arriving in Brookside Close. He then became engaged to Bev McLoughlin and in December 1993 she gave birth to a son called Josh, but they split up a few months later after she revealed that Josh wasn't his son. He was actually Ron's grandson and the son of Ron's son Mike.

In early November of that year, Ron's 14-year-old son Tony was left in a coma after fracturing his skull in a car crash which had claimed the life of Frank Rogers. Frank had crashed after swerved to avoid an oncoming car which was being driven recklessly by neighbour, Jimmy Corkhill. Tony never regained full consciousness and died in February 1994. Jimmy broke down at Tony's funeral, confessing to Ron at the graveside that he was driving the car while high on cocaine.

Ron later married teenage sweetheart Anthea Brindley who had revealed to him that he was the father of her daughter, Megan. In December 2000, only a few days before Christmas, his life was hit by another tragedy when his son Mike was badly injured in a car crash caused by neighbour Tim O'Leary, who had fled the scene after crashing the stolen car that he had been driving. Mike...
Read More