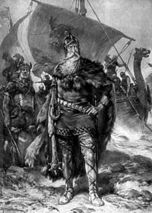 Description:
Rorik or Hrørek was a Danish Viking, who ruled over different parts of Friesland between 841 and 873.

He had a brother named Harald. Harald Klak was probably their uncle, and Godfrid Haraldsson their cousin. The identity of his father remains uncertain. There are various interpretations of the primary sources on his family, particularly because names such as Harald are repeated in the texts with little effort to distinguish one holder of a name from another. But Harald Klak had at least three brothers. Anulo (d. 812), Ragnfrid (d. 814) and Hemming Halfdansson (d. 837). Any of them could be the father of the younger Harald and Rorik. Several writers have chosen Hemming for chronological reasons, estimating Rorik was born following the 810s. This remains a plausible theory, not an unquestionable conclusion.

Harald the younger had been exiled from Denmark and had raided Frisia for several years. He had entered an alliance with Lothair I who was involved in conflict against Louis the Pious, his father. Frisia was part of Louis' lands and the raids were meant to weaken him. By 841, Louis was dead and Lothair was able to grant Harald and Rorik several parts of Friesland. His goal at the time was to establish the military presence of his loyalists in Frisia, securing it against his siblings and political rivals Louis the German and Charles the Bald.<ref...
Read More