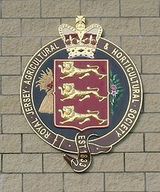 Description:
The Royal Jersey Agricultural & Horticultural Society (RJA&HS) is an agricultural association in Jersey. It has been instrumental in the development of the Jersey cow and its success throughout the world, and today is responsible for management of the breed in its Island home.

History of the Society

On the 26 August 1833 a meeting was held in St. Helier, chaired by the Lieutenant-Governor of Jersey, Major General Thornton, to consider forming an agricultural society. At this meeting it was unanimously agreed “...to be highly desirable to form in this Island an Agricultural and Horticultural Society”.

An earlier attempt to form an agricultural society in Jersey in 1790 had failed, but this time it was successful and the first meeting of the new society was held on the 7 September 1833. The aims of the new society were “to create a spirit of industry and emulation, to offer premiums for the improvement of agriculture, breeding of cattle, improved domestic economy, cleanliness and comfort in cottages, and also for the encouragement of industry and good behavior among servants and labourers in the employment of members or subscribers of the Society”.

This was at a time during the 19th century, following the agricultural revolution in the United Kingdom, when many such societies were founded to...
Read More