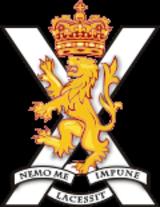 Description:
The Royal Regiment of Scotland is the senior and only Scottish line infantry regiment of the British Army Infantry. It consists of five regular and two territorial battalions, each formerly an individual regiment (with the exception of the first battalion, which is an amalgamation of two regiments). However, each battalion maintains its former regimental Pipes & Drums to carry on the traditions of their antecedent regiments.

As part of restructuring in the British Army, the Royal Regiment of Scotland's creation was announced by the Secretary of State for Defence, Geoff Hoon in the House of Commons on 16 December 2004, after the merger of several regiments and the reduction in total regular infantry battalions from 40 to 36 was outlined in the defence white paper, Delivering Security in a Changing World, several months earlier.

The regiment consists of a total of seven battalions: one of these was formed by the amalgamation of the Royal Scots and King's Own Scottish Borderers, while the others are each formed from one of the remaining single-battalion regiments of the Scottish Division. Along with The Rifles, it is currently the largest infantry regiment in the British Army. Of all of the new regiments formed following the announcement of 16 December 2004, the Royal Regiment of Scotland is the only one where the former regimental titles have been prominently retained with the new numbered battalion designations as subtitles. There is however a common regimental...
Read More