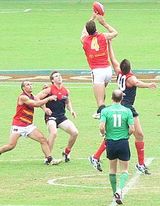 Description:
In Australian rules football, a ruckman is typically a tall and athletic player who contests at centre bounces and stoppages (such as boundary throw-ins and ball-ups). The ruckman is one of the most important players on the field. They are often key to coaching strategy and winning centre clearances which result in the most goal kicking opportunities (inside 50s).

The role of the ruckman in Australian Rules is similar to a lock in rugby union contesting a line-out. The key differences are that with the exception of boundary throw-ins, the ball is almost always thrown straight up high into the air rather than horizontally, so in this respect, the ruckman is similar to a basketball centre. The ruckman needs to be able to control the ball by palm tap or fist with outstretched arms. Unlike rugby, the ruckman must rely on his vertical leap and is not assisted by teammates and Australian football rucking often involves vigorous mid-air collisions with the opposing ruckman.

With no offside or knock on rules, the ruckman can tap the ball in any direction. Before a bounce down or ball up, ruckmen confer with the onballers (rovers and ruck-rovers) to pre-determine the direction of the tap so that they can position themselves to best receive it to the team's advantage.

The ruckman is typically the tallest player on either team. A typical professional Australian Football League ruckman is over 200cm or 6'7.

When a ruckman successfully beats his opponent by contacting the ball, it...
Read More