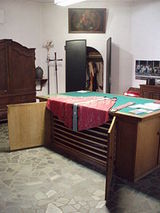 Description:
A sacristy is a room for keeping vestments (such as the alb and chasuble) and other church furnishings, sacred vessels, and parish records.

The sacristy is usually located inside the church, but in some cases it is an annex or separate building (as in some monasteries). In most older churches the sacristy is near one of the side altars or more usually behind or to the side the main altar. In newer churches the sacristy is often in another location, such as near the entrances to the church. Some churches have more than one sacristy, each of which will have a specific function. Often additional sacristies are used for maintaining the church and its items - such as candles and other materials.

The sacristy is also where the priest and attendants vest and prepare before the service. They will return there at the end of the service to remove their vestments and put away any of the vessels used during the service. The hangings and altar linens are stored there as well. The Parish registers may be kept in the sacristy and are administered by the parish clerk.

Sacristies usually contain a special wash basin, called a piscina, the drain of which is properly called a "sacrarium" in which the drain flows directly into the ground to prevent sacred items such as used baptismal water from being washed into the sewers or septic tanks. The sacrarium is used to wash linens used during the celebration of the Mass and purificators used during Holy Communion. The cruets, chalice,......
Read More