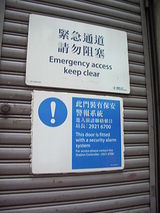 Under the latest proposal as of June 2005, Sai Ying Pun will serve as a station on the proposed extension of the Island line known as West Island Line, as opposed to a transfer station to another line serving the Southern District with the same name as in previous plans.

The station appeared in Hong Kong Mass Transit: Further Studies in 1970. It was to be built as part of the Island Line in the 1980s, but construction of the line did not commence westwards beyond Sheung Wan, citing inadequate passengers and technical difficulties by contractors.

In , the Planning Department of the government has indicated one possible location under Des Voeux Road West at Ko Shing Street as of December 2003. A ventilation shaft marked with MTR notices can be found at the intersection. A large void facing Des Voeux Road West, sealed, can also be found at a nearby medical centre, which some have speculated that it was reserved for a to-be-built exit. These findings suggest that this was the original proposed location.

However, in by the MTR in May 2002, the proposed station was shifted further west to the intersection of Des Voeux Road West and Water Street.

In March 2004, the MTR moved the station back east but south of the initial alignment under King George V Memorial Park. Source from MTR Corporation Limited...
Read More