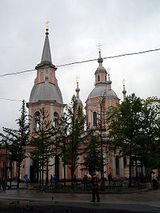 The cathedral was conceived at the time of Peter the Great as the chapter church of Russia's first chivalric order, that of Saint Andrew. The most famous architect of the Nordic countries, Nicodemus Tessin the Younger, was called upon to design a church resembling Saint Peter's Basilica in Rome and exceeding 430 feet in length.

By the time Tessin submitted his designs, the tsar had died and the costly project was suspended. Two years later, Giuseppe Trezzini, a city architect to St. Petersburg, had the territory behind the building of the Twelve Colleges cleared from wood and built a modest timber church, which was consecrated by Feofan Prokopovich in the name of Saint Andrew on 8 October 1732. It was an austerely rational structure with few stylistic pretensions. Empress Anna donated furnishings to the church, while the icon screen required by Orthodox usage was taken from a chapel of the neighbouring Menshikov Palace.

As the timber church was found too small to house its increasing congregation, Trezzini designed a stone church, which was founded on 2 July 1740 in the proximity of the timber cathedral. The shell of the church was erected within five years, but decoration works prevented its consecration until 1760. It was here that Mikhail Lomonosov and Vasily Trediakovsky were sworn in as professors of the Imperial Academy of Sciences on 30 July 1745. The structure, dedicated in the...
Read More