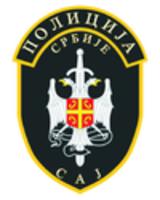 Description:
The Special Anti-terrorist Unit () (CAJ/SAJ) is a special operations and tactical police unit in Serbia.

The SAJ was formed in the former Yugoslavia, due to the increasing phenomenon of terrorism in Europe that was occurring at the time from such groups as: IRA, ETA, Red Army Faction and the Red Brigade. The unit was founded on, 13th May 1978

The detachment for special effects in the Federal Secretariat of Internal Affairs - SSUP, and was appointed the first commander Franz Kos. After seven months since the founding of the federal unit for special effects, a decision was taken to establish on republic and provincial levels a unit with the same purpose. The Unit for Anti-terrorist effects (Jedinica za antiteroristička dejstva - JATD) in the Republic Secretariat of Internal Affairs - RSUP of SR Serbia was established in Novi Beograd on December 18, 1978.

The first commander of unit was Miloš Bujenović. Main tasks of new formed unit were classical fight against terrorists, to prevent aircraft hijacking, release of hostages, the fight against organized crime and similar action of the high-risk in urban areas. In 1983 units base was relocated to the Belgrade airport and renamed in to Units for special effects (Jedinica za specijalan dejstva RSUP). In 1991 unit was again renamed in to Special units (Specijalne jedinice), and it's new commander was Radovan Stojičić. On June 1, 1992, Command of Special Anti-terrorist units (Komanda SAJ) was...
Read More