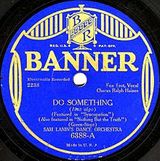 Lanin's brothers, Howard and Lester, were also bandleaders, and all of them had sustained, successful careers in music. Lanin was one of ten children born to Russian-Jewish immigrants who emigrated to Philadelphia in the decade of the 1900s. Sam played clarinet and violin while young, and in 1912 he was offered a spot playing in Victor Herbert's orchestra, where he played through World War I. After the war he moved to New York City and began playing at the Roseland Ballroom in late 1918. There he established the Roseland Orchestra; this ensemble recorded for the Columbia Gramophone Company in the early 1920s.

Sam recorded with a plethora of ensemble arrangements, under names such as Lanin's Jazz Band, Lanin's Arcadians, Lanin's Famous Players, Lanin's Southern Serenaders, Lanin's Red Heads, Sam Lanin's Dance Ensemble, and Lanin's Arkansaw Travelers. He did not always give himself top billing in his ensemble's names, and was a session leader for an enormous number of sweet jazz recording sessions of the 1920s. Among the ensembles he directed were Ladd's Black Aces, The Broadway Bell-Hops, The Westerners, The Pillsbury Orchestra and Bailey's Lucky Seven. He had a rotating cast of noted musicians playing with him, including regular appearances from Phil Napoleon, Miff Mole, Jules Levy Jr. and Red Nichols, as well as Jimmy Dorsey, Tommy Dorsey, Manny Klein, Jimmy McPartland, Bix......
Read More