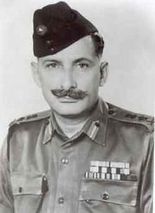 Description:
Field Marshal Sam Hormusji Framji Jamshedji Manekshaw, MC "Sam Bahadur" (lit. Sam the Brave) (3 April 1914 &ndash; 27 June 2008) was a Field Marshal of the Indian Army. His distinguished military career spanned four decades and five wars. Manekshaw rose to be the 8th chief of staff of the Indian Army in 1969 and under his command, Indian forces "concluded" a victorious campaign, the 1971 Indo-Pakistani War, that led to the liberation of Bangladesh.

Sam Manekshaw was the first of only two Indian military officers to hold the highest rank of Field Marshal in the Indian Army (the other being Field Marshal K M Cariappa).

Manekshaw was born in Amritsar, Punjab to Parsi parents, Hormusji Manekshaw, a doctor, and his wife Heerabai, who moved to the Punjab from the small town of Valsad on the Gujarat coast. After completing his schooling in Amritsar and Sherwood College (Nainital), with distinction in the Senior Cambridge examination, he asked his father to send him to London to study medicine. When his father refused to send him till he was older, in an act of rebellion Manekshaw appeared for and qualified in the entrance examination for enrolment into the Indian Military Academy (IMA), Dehradun and as a result became part of the first intake of 40 cadets on 1 October 1932. He passed out from the IMA on 4 February 1934 and was commissioned as a second lieutenant in the Indian Army.