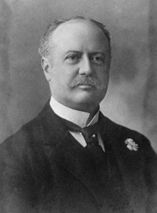 He was born in Paterson, New Jersey on January 10, 1852, the youngest of six children born to Christopher Colt (brother to arms maker Samuel Colt) and Theodora Goujand DeWolf Colt of Bristol, Rhode Island. His friends and family called him "Pom".

In 1875, he was appointed aide-de-camp to Rhode Island Governor Henry Lippitt, receiving the honorary rank of "colonel". He would use this title for the remainder of his life.

In 1886, Colt founded the Industrial Trust Company, a financial organization and served as its president until 1908. Later it became known as Industrial National Bank, and Fleet Bank before being merged into Bank of America.