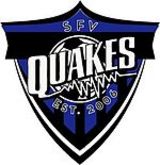 Description:
San Fernando Valley Quakes was an American soccer team based in Calabasas, California, United States. Founded in 2006, the team played in the USL Premier Development League (PDL), the fourth tier of the American Soccer Pyramid, until 2008, when the franchise folded and the team left the league.

The team played its home games at John Shepard Stadium on the campus of Los Angeles Pierce College in nearby Woodland Hills, California. The team's colors were blue and black.

The Quakes made their debut in PDL competition in 2006, one of several teams joining the Southwest division as it expanded to nine teams. Playing at John Elway Stadium on the campus of Granada Hills Charter High School, head coach Ali Khosroshahin's team made an inauspicious start, tying 1-1 with Los Angeles Storm in their opening game, and then suffering a devastating 4-3 home defeat to Orange County Blue Star, having led 3-0 with 8 minutes to go. The Quakes' mid-season form improved considerably, highlighted by several impressive victories, including a 5-1 thrashing of California Gold, and an astonishing 7-4 road victory over San Diego Gauchos which included a hat trick from central defender Derek Hanks. The Quakes were still in with a shout of making the playoffs as the final round of games came round, but a 1-0 defeat to the eventual divisional champions......
Read More