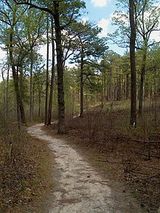 Description:
The Sandhills is a region in the interior of the U.S. states of North Carolina and South Carolina. It is a strip of ancient beach dunes which generally divides the Piedmont from the coastal plain, and is the evidence of a former coastline when the ocean level was higher, or the land lower. The beach deposits were formed principally during the Miocene Epoch, circa 20 million years ago. Typical beach fossils are found along the front edges. The coastal plain is terraced from other ocean levels, but none appear to have been so long-lasting, so as to build up dunes of this size.

Because they are predominantly porous, sandy soils, the area tends to be droughty and irrigation is required for agriculture. Some areas are noted for peach production, primarily because peaches need a well drained soil.

Prior to agricultural use, most of the Sandhills were forested with Longleaf Pine, Loblolly Pine, Turkey oak, and Blackjack oak. In areas of extreme drainage, the forests are visibly scrubby. Oaks increase under conditions of wildfire exclusion, whereas Longleaf Pine will dominate under a regime of frequent fires. Understory vegetation is of plants that are well adapted to droughty conditions, as well as the frequent lightning-induced fires typical of the region. Wiregrass (Aristida spp.) is frequently extensive in the understory. Carnivorous plants, especially pitcher plants, often occur in the herb layer.