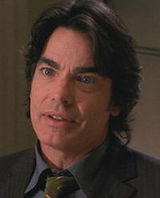 Description:
Sanford "Sandy" Cohen is a fictional character on the FOX series The O.C.. He is portrayed by Peter Gallagher.

Sandy, a lawyer, raconteur, and son of Sophie Cohen, is married to Kirsten Cohen. Their eldest child, Seth, is something of a social misfit. Sandy's father left his mother when he was young and he has an unnamed brother and sister. Sandy was originally a public defender, which brought him into contact with troubled teen, Ryan Atwood, whom he eventually adopted and took on as his own after his mother abandoned him. He has since then gone into private practice in a law firm, before going to start his own law firm and finally taking over his late father-in-law's company, the Newport Group. He and his wife have three children.

Throughout the series, Sandy serves as a moral center, often guiding and supporting Seth and Ryan through their problems.

Sandy has a mainly stable marriage with Kirsten and Seth, his son, with the occasional problem surfacing. Unresolved issues of trust and jealousy came to the surface with regards to Kirsten's former childhood sweetheart, Jimmy Cooper, who was also their next-door neighbor.

He left the Public Defender's Office to go into private practice at Patridge, Savage and Khan, along with his former colleague from the District Attorney's office, Rachel Hoffman. She causes tension between Sandy and Kirsten when Kirsten finds Sandy enjoying a drink with Rachel one night while he was supposed to be at a meeting. Later on,...
Read More