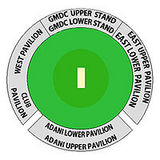 Description:
Sardar Patel Stadium (; Motera Stadium) is one of the premier Cricket stadiums of India located in the Motera locality of Ahmedabad. Because of its location, the stadium is commonly called Motera Stadium to avoid confusion with another stadium of the same name in Navrangpura locality of Ahmedabad. Sardar Patel stadium is owned by Gujarat Cricket Association and comes under the aegis of the West Zone. It is the largest stadium in the state of Gujarat, and has an official capacity of 54,000 spectators. It is equipped with floodlights for day-and-night games and is a regular venue for Test cricket and One Day Internationals (ODI) matches.

Formerly known as the Gujarat Stadium, the ground was later renamed in tribute to Sardar Vallabhbhai Patel, India's first Home Minister and Deputy Prime Minister. Apart from cricket, the ground has played host to a number of programs arranged by the Government of Gujarat. The pitch once favoured the bowlers, but has lately been host to competitive games.

As of March 2011, the Motera stadium has played host to 22 ODI matches. In India, only Eden Gardens (25 ODI matches) and M. Chinnaswamy Stadium (23 ODI matches) have hosted more ODI matches than Motera Stadium. The stadium was also one of the host venues for 2011 Cricket World Cup held in India. It hosted 3 matches, including a Quarter final match between India and Australia.