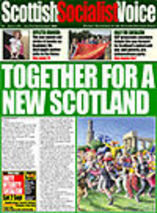 It was first edited by Alan McCombes who acted as editor until 2003. For a short time it was edited by Kath Kyle, followed by Joanna Harvie and is currently edited by Ken Ferguson. The deputy editor is Wullie McGartland. It was originally launched as a fortnightly publication, and moved to a weekly format in early 2003, before returning to fortnightly production in 2007. In 2009 it changed from a broadsheet to a tabloid format.

Current readership is estimated as around 3,000, with distribution through subscription and street sales.

The aims of the Voice are:

In November 2006 it celebrated its tenth anniversary.

Current columns which regularly appear in the Voice include: