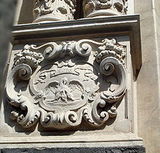 Description:
Scrollwork is an element of ornamentation and graphic design using a spiral. The name comes from by the supposed resemblance to the edge-on view of a rolled parchment scroll. "Scrollwork" is today mostly used in popular language for two-dimensional decorative flourishes and arabesque of all kinds, especially those using circular or spiralling shapes. However the term "scroll" is more likely to mean a more regular decorative pattern based on incomplete circles and spirals, often using foliage forms. Such patterns were an esssential element of classical and medieval decoration. Scrollwork (in the popular definition) is most commonly associated with Baroque Architecture, though it saw uses in almost every decorative application, including furniture, metalwork, porcelain and engraving. Applications of scrollwork can be seen in the volutes at the head of an Ionic column and the carved scroll at the end of the pegbox on members of the violin family. It was further extended in Mannerism into strapwork, which often terminated in scrolls. Continuous scroll decoration has a far longer history.

The use of scrolls in ornament design has been present in human culture since at least the Bronze Age. For...
Read More