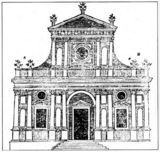 Description:
Sebastiano Serlio (6 September 1475 &ndash; 1554) was an Italian Mannerist architect, who was part of the Italian team building the Palace of Fontainebleau. Serlio helped canonize the classical orders of architecture in his influential treatise, I sette libri dell'architettura ("Seven Books of Architecture"), sometimes published among his collected works, Tutte l'opere d'architettura et prospettiva.

Born in Bologna, Serlio went to Rome in 1514, and worked in the atelier of Baldassare Peruzzi, where he stayed until the Sack of Rome in 1527 put all architectural projects on hold for a time. Like Peruzzi, he began as a painter. He lived in Venice from about 1527 to the early 1540s but left little mark on the city.

The first volume of his treatise appeared in Venice in 1537, titled Regole generali d'architettura("General Rules of Architecture"). It is also known as Serlio's "Fourth Book" (albeit published first) because it was the fourth in Serlio's original plan of a treatise in seven books. Serlio never brought this plan to completion. Serlio's model of church façade was a regularized version, cleaned up and made more classical, of the innovative method of providing a facade to a church with a high vaulted nave flanked by low side aisles, providing a classical face to a Gothic form, that was first seen in Alberti's Santa Maria Novella in Florence (c. 1458). The idea was in the air in the 1530s: several contemporary churches...
Read More