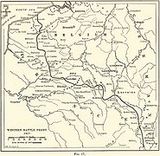 Second Battle Of The Aisne

Second Battle of the Aisne

Description:
<!-- There is a map of this battle: Aisne Front 1917.jpg Difficult to to know where to work it in -->The Second Battle of the Aisne (, or ), was the massive main assault of the French military's Nivelle Offensive or Chemin des Dames Offensive in 1917 during World War I.

Robert Nivelle, Commander-in-Chief of the French army, initiated the plan in December 1916 after he replaced Joseph Joffre, who had been disgraced by a series of strategic defeats. The objective of his plan was to secure a prominent, 80 km long, east-west ridge underlain by large, quarried caves that had been sheltering German troops from the French artillery. When the French frontal assault along the Chemin des Dames began in April 1917, it was countered everywhere by profoundly intense German machine gun fire and mortar attacks that stalled any attempt of an advance by the second day, resulting in horrific numbers of deaths. The main battle ended in disaster only a few weeks after it began, destroying Nivelle's career and sparking widespread mutiny throughout the French army.

The ridge at Chemin des Dames was finally captured by the French in the Battle of La Malmaison led by Marshal Philippe Pétain five months later.

When he succeeded Joffre as commander of the French army, Nivelle argued that an immense onslaught against the German lines would bring French victory in 48 hours.Strachan, Hew. The First World War. (New York: Viking, 2003)....
Read More