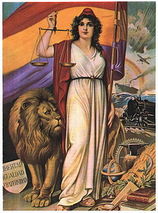 Description:
The Second Spanish Republic was the government of Spain between April 14, 1931 and its destruction by a successful military rebellion led by General Francisco Franco.

The Second Spanish Republic was proclaimed when King Alfonso XIII left the country following municipal elections in which republican candidates won the majority of votes. Its government went into exile on April 1, 1939, when the last of the loyalist Republican forces surrendered to rebel forces (calling themselves nacionales) led by Generalísimo Franco at the end of the Spanish Civil War.The government in exile of the Second Spanish Republic would have an embassy in Mexico City until 1976 and was formally dissolved the following year.

The Second Spanish Republic came to power in April 1931 in an attempt to build a modern Spain. Economic hardships led to the downfall of General Miguel Primo de Rivera's government on January 29, 1930, in the wake of the 1929 Wall Street Crash. Popular sympathy for the monarchy was greatly undermined following the king's support for Primo de Rivera's dictatorial regime.

Alfonso XIII was sidelined by the Spanish people. For the working class he was the symbol of oppression, the middle class would not forgive or forget the dictatorial Primo de Rivera, and even the nobility and ruling class considered that his continuity was not an option. General Damaso Berenguer, handpicked by general Primo de Rivera led a new government and tried...
Read More