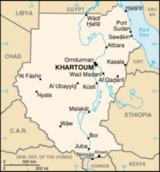 Description:
The Second Sudanese Civil War started in 1983, although it was largely a continuation of the First Sudanese Civil War of 1955 to 1972. Although it originated in southern Sudan, the civil war spread to the Nuba mountains and Blue Nile by the end of the 1980s.

Roughly two million people have died as a result of war, famine and disease caused by the conflict. Four million people in southern Sudan have been displaced at least once (and often repeatedly) during the war. The civilian death toll is one of the highest of any war since World War II., U.S. Committee for Refugees, 2001. Archived 10 December 2004 on the Internet Archive. Accessed 10 April 2007. The conflict officially ended with the signing of a peace agreement in January 2005.

The war is often characterized as a fight between the central government expanding and dominating peoples of the periphery, raising allegations of marginalization. Kingdoms and great powers based along the Nile River have fought against the people of inland Sudan for centuries. Since at least the 17th century, central governments have attempted to regulate and exploit the undeveloped southern and inland Sudan.