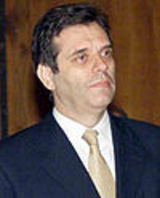 Description:
Parliamentary elections took place in Serbia on 21 January 2007. The first session of the new National Assembly of the Republic of Serbia was held on 14 February 2007.

Parties registering as ethnic minority parties (options 8, 10, 14, 17, 19 and 20) did not need to surpass the 5% threshold to gain seats in the parliament, but instead needed to pass a natural threshold at 0.4%. For the first time in a decade, Albanian parties from the Preševo Valley participated in the elections, but Kosovo Albanian parties continued their boycott of Serbian elections.

6,652,105 voters were eligible to vote, an increase of 14,000 voters when compared to the constitutional referendum held a few months before. 31,370 of the eligible voters were living abroad, and 7,082 were in prison. Most Kosovo Albanians have not registered to vote. There were 8,441 ballot stations, 58 of which were abroad. Final election results had to be announced by midnight on January 25, 2007.

The d'Hondt method was used to distribute parliamentary mandates following the election. Parties and coalitions had 10 days following the announcement of the final results to decide which candidates will take their alloted seats in parliament. Parties then had three months to negotiate a government.

Twenty party lists registered with the electoral commission before the deadline of 2007-01-05: