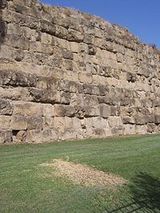 It is presumed that the wall is named after the sixth Roman King, Servius Tullius. Although its outline may go back to the 6th century BC, the currently extant wall was, it is estimated, built during the later Roman Republic, possibly as a way to prevent a repeat of the sack of Rome during Battle of the Allia by the Gauls of Brennus. Due to the ease with which the Gauls entered the city, it is conjectured that at some time previous to this, Rome had been forced by its Etruscan rulers to dismantle any significant prior defenses.

The wall was built from large blocks of tuff<!--NOT tufa--> (a volcanic rock made from ash and rock fragments ejected during an eruption) quarried from the Grotta Oscura quarry near Rome's early rival Veii. In addition to the blocks, some sections of the structure incorporated a deep fossa, or ditch in front of it, as a means to effectively heighten the wall during attack from invaders. Along part of its topographically weaker...
Read More