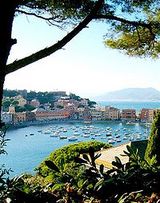 Description:
Sestri Levante is a town and comune in Liguria, Italy. Lying on the Mediterranean Sea, it is approximately 56 kilometers south of Genoa and is set on a promontory. While nearby Portofino and the Cinque Terre are probably the most well known tourist destinations on the Italian Riviera, Sestri Levante is becoming quite a favorite among Italians. This once quiet fishing village is slowly turning into a tourist hotspot, developing an old and a new town.

Sestri Levante has its origins as an ancient maritime and merchant center. Originally a small island with a promontory, it was later connected to the mainland. In Roman times, it was known as Segesta Tigullorum (or Tigulliorum) or simply Segesta. It was mentioned in the year 909 in a certificate of a man named Berengario, in which part of its territory was ceded to the basilica di San Giovanni di Pavia; after it was invaded by the Barbarians. During the Middle Ages, Sestri Levante began to...
Read More