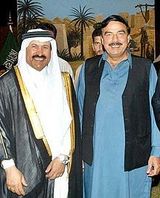 Description:
Sheikh Rashid Ahmed (, born November 6, 1950 in Rawalpindi) is a Pakistani politician and writer. He served as the Federal Minister for Railways in Pakistan from 2006 to 2008. His previous portfolio have included appointments as Federal Minister for Labor and Manpower, Information and Broadcasting, Industries, Sports Culture, and Tourism and Investment. He formed his own political party Awami Muslim League in 2008.

Sheikh Rashid Ahmed was born in Bhabra Bazar, Rawalpindi. His father was from Srinagar, Kashmir while mother was from Amritsar. In 1947 his parents migrated from Srinagar and settled in Rawalpindi. They established business in silk.Rashid got his initial education from Christian High school Rawalpindi. He studied at Rawalpindi Polytechnic College and later at Gordon College. He completed his Bachelor of Laws at the University of Lahore. Throughout his education, Rashid was very active in student politics. On November 7, 1968 he organized movement against Ayub regime in which one student Hameed Shaheed sacrificed his life. Rashid was among three student who were barred from getting admission in any educational institution.

Later he got admission in Gordon College Rawalpindi and took active part in student politics. He emerged as a successful student leader and was elected in Student Union as Joint Secretary, Secretary, Vice President and President during four years respectively. He graduated from......
Read More