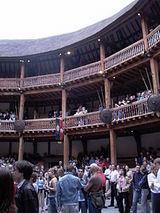 Description:
Shakespeare's Globe is a reconstruction of the Globe Theatre, an Elizabethan playhouse in the London Borough of Southwark, located on the south bank of the River Thames, but destroyed by fire in 1613, rebuilt 1614 then demolished in 1644. The modern reconstruction, of the 1614 building, was founded by the actor and director Sam Wanamaker and built approximately from the site of the original theatre. The theatre was opened to the public in 1997, with a production of Henry V. The site also includes a reconstruction of the Blackfriars Theatre.

The original Globe Theatre was built in 1599 by the playing company Lord Chamberlain's Men, to which Shakespeare belonged, and was destroyed by fire on June 29, 1613. The fire was caused by an accident with a cannon during a production of Henry VIII. The theatre was rebuilt by June 1614 (the exact opening date is not known), but was officially closed by pressure of Puritan opinion in 1642 and demolished in 1644 .

In 1970, American actor and director Sam Wanamaker founded the Shakespeare Globe Trust and the International Shakespeare Globe Centre, with the objective of building a faithful recreation of Shakespeare's Globe close to its original location at Bankside, Southwark. Many detractors...
Read More