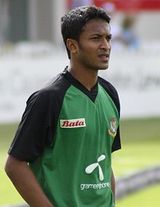 Description:
Shakib Al Hasan, () (born 24 March 1987 in Magura) is a Bangladeshi international cricketer and captain of the national team. He is an all-rounder, batting left-handed in the middle order and bowling slow left-arm orthodox. He represented Bangladesh at under-19 level, 18 Youth One Day Internationals between 2005 and 2006. Shakib made his One Day International (ODI) debut against Zimbabwe in August 2006, and his Test debut on 18&nbsp;May against India. During a match against New Zealand in 2008, Shakib took the best bowling figures by a Bangladesh player in Tests, 7&nbsp;wickets for 37&nbsp;runs. Until then, Shakib had been considered more of a batsman than a bowler, although still an all-rounder. From January 2009 to April 2011, Shakib was ranked first amongst ODI all-rounders by the ICC.

Shakib was appointed Bangladesh's vice-captain in June 2009 when Mashrafe Mortaza replaced Mohammad Ashraful as captain. During Bangladesh's tour of the West Indies the following month, Mortaza injured himself and Shakib took over the captaincy. He was 22&nbsp;years old at the time. Initially a temporary position until Mortaza recovered, Shakib's success against the West Indies, securing his side's first overseas series win, ensured he retained the position even after Mortaza recovered. He was named The Wisden Cricketer's "Test Player of the Year" in November 2009. In July 2010, he stepped down from the ODI captaincy to concentrate on his personal performance....
Read More