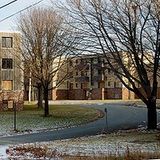 Description:
Shannon Park is a former military community on the eastern shore of Halifax Harbour in the Halifax Regional Municipality (HRM) in Nova Scotia, Canada. It is immediately south of the A. Murray MacKay Bridge in the city of Dartmouth. It straddles several transportation routes, namely, Highway 111 and a CN Rail freight line, as well as Halifax Harbour and is bordered on the south by Tuft's Cove.

Although presently unused, Shannon Park remains part of the CFB Halifax defence complex. Shannon Park, along with the adjacent military community of Wallace Heights, was primarily used for housing the families of personnel serving with the Canadian Navy. It was built in the 1950s to remedy the shortage of housing which plagued sailors and their families in Halifax during World War Two.With defence cutbacks reducing the number of personnel serving in the navy and expanded housing available on the civilian market, Shannon Park and Wallace Heights were closed in 2004 and remaining residents were moved to military housing at Willow Park. The former housing structures have fallen into decay, leading residents to refer to the area as 'Little Detroit'. The former Shannon Park high school is now an elementary school.

Immediately north of the community on the Bedford basin adjacent to the MacKay bridge lies the Bedford Institute of Oceanography, as well as a Canadian Coast Guard...
Read More