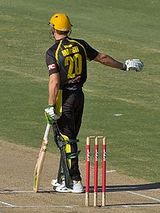 Description:
Shaun Edward Marsh (born 9 July 1983 in Narrogin, Western Australia), is an Australia cricketer who plays for the Western Warriors in Australian domestic cricket and has represented Australia at One Day International and Twenty20 International levels. The left-handed opening batsman is the son of former Test cricketer Geoff Marsh.

After representing Western Australia at Under 17 and Under 19 level, Marsh represented Australia at both the 1999–2000 and 2001–02 ICC Under-19 World Cups. In the 1999–2000 tournament, held in Sri Lanka, he was the second highest run scorer for Australia behind Shane Watson, and other notable teammates included played alongside Michael Clarke, Nathan Hauritz and Mitchell Johnson. At the 2001–02 tournament in New Zealand, which Australia won, he scored the fourth most runs for the tournament, with the captain of the Australian side, Cameron White being the leading run scorer.

During this time, Marsh made his first-class cricket debut in 2000–01, against South Australia at the WACA Ground in March 2001. He played as a middle order batsman, and played this final three games of the season, before continuing to represent both the Australian Under 19 side and the Australian Cricket Academy throughout 2001 in the lead-up to the World Cup in New Zealand in January to February 2002.

In October 2002, Marsh was named to play for Western Australia against the touring......
Read More