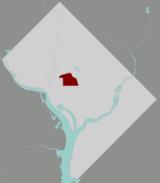 Description:
Shaw is a neighborhood located in the Northwest quadrant of Washington, D.C. It is roughly bounded by M Street, NW or Massachusetts Avenue NW to the south; New Jersey Avenue, NW to the east; Florida Avenue, NW to the north; and 11th Street, NW to the west. The area also includes the U Street Corridor, which is the commercial hub of the Shaw area, extending westward to 16th Street NW.

Florida Avenue marks the northern boundary with the adjacent neighborhoods of Columbia Heights and LeDroit Park. The area consists of gridded streets lined with small Victorian rowhouses. It is dominated by Howard University and the shops and theatres along U Street, 14th Street in the Logan Circle area, and centered along 7th Street NW, the original commercial hub of the area prior to redevelopment in the wake of the 1968 riots and Green Line Metrorail construction.

Shaw is sometimes considered to include Logan Circle, Truxton Circle, and other neighborhoods east of 16th Street and north of Downtown Washington, D.C., but in recent years those neighborhoods have become seen as separate entities.

Shaw grew out of freed slave encampments in the rural outskirts of Washington City. Originally called "Uptown", in an era when the city's boundary ended at "Boundary Street" (now Florida Avenue), in the Urban Renewal Era the neighborhood began to be referred to as Shaw because of the neighborhood Junior High School named after Civil War Colonel Robert Gould Shaw, the commander...
Read More