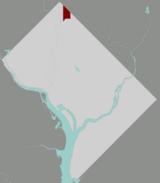 Shepherd Park and the rest of Ward 4 are represented in the Council of the District of Columbia by Muriel Bowser and is home to a number of prominent people including NAACP President Benjamin Jealous and his wife, law professor, Lia Epperson. A number of judges, professors, newspaper reporters, and doctors also live in the community.

Heading out of the city, traveling north on 16th Street, just before getting to the DC-Maryland...
Read More