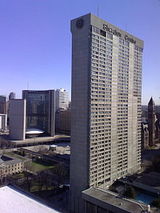 The origins of the brand date back to 1937 when Ernest Henderson and Robert Moore acquired the Stonehaven Hotel in Springfield, Massachusetts. The chain got its name from another early hotel that the pair had acquired, which had a lighted sign on the roof saying "Sheraton Hotel" which was large and heavy and therefore too expensive to change. Instead, they decided to call all their hotels by that name.Henderson and Moore had opened three hotels in Boston by 1939, continuing with their rapid expansion opening properties along the entire East Coast. In the 1940s, Sheraton purchased the famous Hotel Kimball of Springfield, Massachusetts, and transformed the 4-star hotel into The Sheraton-Kimball Hotel, attracting guests like President John F. Kennedy. In 1945, it was the first hotel chain to be listed on the New York Stock Exchange.

In 1949 Sheraton expanded internationally with the purchase of two Canadian hotel chains. The 1960s saw the first Sheraton hotels outside North America with the opening of the Tel Aviv-Sheraton in February 1961 and the Macuto-Sheraton outside Caracas, Venezuela, in 1963. By 1965, the 100th Sheraton had opened its...
Read More