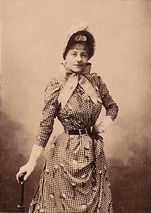 She was born at the château de Coëtsal near Plumergat, in the département of the Morbihan, in Brittany, her father, Joseph-Arundel de Riquetti, comte de Mirabeau, 1820–1860, being the great-grandson of Victor de Riquetti, marquis de Mirabeau (Mirabeau Père), noted 18th century economist, and grandnephew of Honoré Mirabeau the celebrated revolutionary orator. In view of her later opinions, it is interesting to remember that Sibylle was actually descended from Octave Mirabeau's reactionary younger brother, André-Boniface-Louis de Riquetti, vicomte de Mirabeau, (1754–1792) known as Mirabeau-Tonneau because of his notorious embonpoint, who famously broke his sword in front of France's Revolutionary Assembly (where he represented the nobility of the Limousin) while bitterly crying out: "now that The King is giving up his kingdom, a nobleman no longer needs a sword to fight for him!"

Although, in her memoires, "Gyp" stated that she had been born on August 15, which happens to have been Napoleon Bonaparte's birthday, W.Z. Silvermann, in the book listed at the bottom of this article, quotes from Sibylle de Riquetti-Mirabeau's actual birth certificate, to the effect that she had been born in the morning of August 16, 1849. In said birth...
Read More