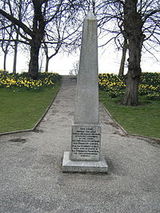 Description:
The siege of Colchester occurred in the summer of 1648 when the English Civil War reignited in several areas of Britain. Colchester found itself in the thick of the unrest when a Royalist army on its way through East Anglia to raise support for the King, was attacked by Lord-General Thomas Fairfax at the head of a Parliamentary force. The initial Parliamentary attack forced the Royalist army to retreat behind the town's walls but was unable to bring about victory, so settled down to a siege. Despite the horrors of the siege, the Royalists resisted for eleven weeks and only surrendered following the defeat of the Royalist army in the North of England at the Battle of Preston .

On 21 May 1648 the county of Kent rose in revolt against Parliament. Lord-General Fairfax led Parliamentary forces to Maidstone and on 1 June recaptured the town. Remnants of the Royalist forces commanded by the Earl of Norwich fled the county to join the revolt in Essex.

On 4 June the Essex County Parliamentary committee in Chelmsford was taken prisoner by a riotous crowd. Colonel Henry Farre and some of the Essex Trained Bands declared themselves in support of the King. Sir Charles Lucas took command of the Essex regiment and on 9 June he was joined by the Earl of Norwich, Lord Capel, Lord Loughborough, Sir George Lisle and about 500 of the Royalist soldiers from Kent. The next day Lucas marched with what was now a total force of around 4,000 troops to Braintree where the county magazine...
Read More